UPDATE (1/24/18): The Town of Clarence Planning and Zoning Department has posted the PowerPoint presentation used in the meeting online. You can access the presentation materials here.

This is the end of the update. The original article continues below:

Last year’s adoption of the Vision: Main Street plan by the Town of Clarence marked a significant milestone on a years-long effort to bring Main Street in Clarence back to the Future. To this point, however, it’s been private projects and community involvement that have taken the lead. That’s about to change. 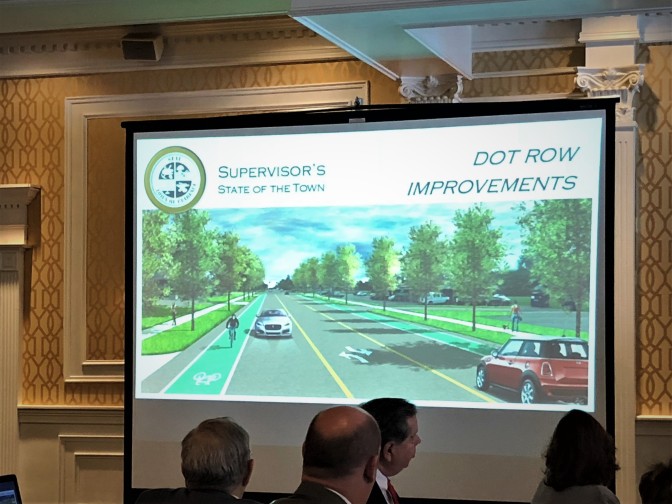 In his State of The Town address on Thursday afternoon, Supervisor Pat Casilio revealed that the Town as been working the New York State Department of Transportation to include bike lanes and other components of the Vision: Main Street plan as a part of a proposed resurfacing of the western portion of Main Street beginning at Transit Road and running east through the Hamlet of Harris Hill. The Supervisor also shared that plans will be going out to bid for the sidewalk project between Transit Road and Sheridan Drive. Both projects are slated to begin this summer.

Together, the changes will represent concrete progress in Main Street’s transformation from a car-centric highway to an inclusive, multi-modal district that’s a destination in its own right.

Later that evening, a well-attended informational meeting at the Harris Hill Volunteer Fire Company want even further. The event was the first opportunity for public input on a plans for a “pocket park” along Nottingham Terrace from Main Street to Oakwood Drive.

Town Planner Jonathan Bleuer was on hand to explain the concept of pocket parks in general and the specifics of how the plan developed from the experience of last summer’s successful Connecting Clarence Street Festival and an effort to restore the historic pillars flanking the historic neighborhood entrance.

Bleuer gave the example of the Clarence Hollow Farmers’ Market as a pocket park. The concept works as a public space that connects a neighborhood to an existing facility such as Main Street. The proposed Nottingham Terrace pocket park would replace the existing one-way entrance to the neighborhood with areas for seating, recreation and group activities, including a larger space at the southern end of the park where Bleuer suggested “you might meet for yoga on a Saturday morning.”

While this meeting was preliminary, and many details remain to be worked out, a lot of work has already been done measuring traffic flows through the community to ensure minimal disruption to Harris Hill Gardens. A slide in the presentation noted that Nottingham Terrace received the least amount of vehicle trips of the seven existing entrances to the neighborhood, and that the space would still be usable by pedestrians and cyclists for access to and from Main Street.

Better yet, funding could be available directly from the DOT as a part of an existing state programs. The overall program would include elements of improvements to Main Street, the pocket park and a bike route connecting Nottingham, Sunset Park and a dedicated path along Wehrle Drive to the existing West Shore bike path. The “Neighborhood Linkage” aspect of the plan would include a bike lane, street lighting and trees. With all of these elements included in the proposal, funding would be available through the Transportation Alternatives Program (TAP) and Congestion Mitigation and Air Quality Improvement (CMAQ) Program.

For residents concerned about preserving the historic entrance to their neighborhood, Supervisor Casilio, himself a resident of Harris Hill, reminded those in attendance that the DOT has expressed concerns about the existing Nottingham configuration as “too close to Harris Hill and Main Street,” and noted that other alternative available to the DOT could include moving the Nottingham intersection further to the east.

Overall, this first public foray for the plan seemed very positive, and the Town seems genuinely interested in delivering on the promise of Vision: Main Street with public spaces that preserve historical elements while linking the Harris Hill Gardens neighborhood to its business district.